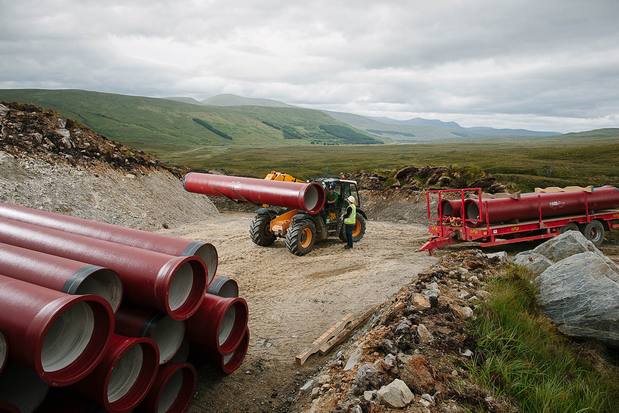 Green Highland Renewables have just begun construction of an ambitious project to develop three separate hydro schemes near Achnacarry in the Scottish Highlands, all linked by a 9.5km private grid network.

The three mutually supporting schemes are located on the north shore of Loch Arkaig, about 15 miles north of Fort William, and together total 2.5MW of generating capacity – enough to power nearly 2000 homes.

The projects, which are 750kW, 500kW and 1250kW, are being financed by Triple Point, the investment management group, which has now supported five Green Highland Renewables projects since 2010.

“Loch Arkaig is quite remote, with challenging topography, and the cost to connect each scheme to the grid individually would have been prohibitive,” says Green Highland Renewables Chief Executive Officer Richard Round.

“However by linking them together with a dedicated private grid, which then ties into the local distribution network, we can make all the projects generate an economic return,” Round says.

“This is an innovative and holistic approach we have already used successfully in a number of other developments, and as degression of the hydro feed in tariff starts to bite, we will continue to be innovative in how we build and finance schemes,” Round concludes.

The schemes will be constructed by MAM Contracting, a highly experienced civil contractor which has already worked with GHR. All three are due to complete in 2015.

Two of the developments, Allt Dubh and Loch Blair, lie fully within the Achnacarry Estate, whilst the third, Allt Cheanna Mhuir, lies partly on Forestry Commission Scotland land. The local Achnacarry, Bunarkaig and Clunes Community Group will receive a royalty payment in addition to a community benefit of £5000 per MW per annum.

Commenting on the project, community group chair Richard Sidgwick said: “Green Highland Renewables has worked with the community from the outset and kept us fully informed of progress at all stages; any concerns that we might have had have been addressed quickly and effectively.

“We work with the estate on a variety of issues and are delighted that these projects are now a reality, and that the benefits of involvement in renewable energy will contribute to their business.”

Donald Cameron, owner of Achnacarry Estate, said: “Achnacarry Estate is delighted that construction on these three hydro schemes has now started – it represents the fruition of several years’ hard work by Green Highland Renewables. We are also grateful to the local ABC community group for their consistent support of these projects.”

Commenting on today’s announcement Ben Beaton, Partner at Triple Point, said: “Hydroelectric power provides efficient and environmentally-friendly energy to customers, while yielding stable returns for investors. The completion of these three hydro schemes brings the total we have now funded to five.  We are delighted to be working with GHR, one of Scotland’s leading hydro developers and look forward to a close working partnership with them on future schemes.”

Green Highland Renewables first began work on the Achnacarry projects in 2009, with much of the time since then spent waiting for a grid connection date.  Consents were secured in 2013.

All three schemes will be powered by Austrian Kössler turbines.

Green Highland are also looking at two further projects in the immediate area, one of which will commence in 2015.